Looking at the agreement over and over again shows that the country should take supposedly stocks of the benefits for the country and her citizenry in future; calling on Nigeria government for final sign means the country is at verge of throwing her borders open and embraces all mama of the African Continental Free Trade Area scheme. 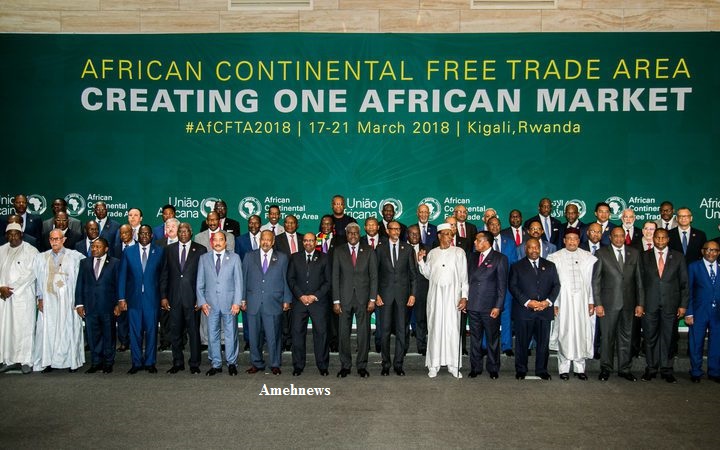 President Muhammadu Buhari who have power to sign or not to had earlier withheld his assent to the treaty, but at present there are cleared indication toward signing the said agreement going by his intent recently comment, when he said, “I kept it on my table. I will soon sign it.” Should Africa’s largest economy, Nigeria be ill-timed walking blindfolded into an agreement in which, like the previous ones, she may eventually end up as second best?.

Nigeria has the largest market which they are targeting indirectly, it is high time, Nigeria has signed many treaties both good and bad in the previous, therefore let the country takes time to under studies the proposed AfCFTA agreement very well though the treaty is an attempt to boost intra-African trade, which at present is estimated at just 10 per cent. It aspires to operate a single market for goods and services, just like the European Union. But the European Union took many years before finally reached signing their own. The treaties with a population estimated at more than 1.2 billion and bringing together 54 countries, it has the potential of becoming the largest of such regional economic blocs in the world based on the number of countries involved. Facilitating trade among the countries of the continent will imply introducing such sensitive things as an African customs union, liberalisation of 90 per cent of tariff lines, free movement of people and goods across borders and, ultimately, the introduction of a common currency.

As at today the country, with an economy that is still primarily rudimentary and import-dependent, should serve as obvious that Nigeria is not okay for the kind of competition that is likely to come from AfCFTA thereafter. A country that had the potential to become the richest in Africa as a result of the discovery of oil, Nigeria which should have dependent on the production and export of her commodities and raw materials for developed and advanced economies. Though largest oil producer in Africa but still depends on imports for practically every drop of refined petroleum products for local consumption.

Besides, it is openly know that the country’s manufacturing sector had long become moribund as a result of over-reliance on oil and difficult operating environment. For now, the absence of regular electricity supply to power the industries has adds additional 40 per cent cost to locally manufactured goods, thus rendering them uncompetitive. Added to the absence of other forms of infrastructure, many manufacturing companies have had to either fold up or relocate to neighbouring countries where the business environment seems more hospitable.

Even within the West African sub-region, where Nigeria should be a dominant figure, the country has not been able to withstand the competition that has come with the ECOWAS Common External Tariff. As at now through many exploiting trade liberalization among ECOWAS, many foreign countries have started bring their goods to the West African countries and repackage them as goods originating in West Africa. They are then shipped into Nigeria, paying preferential customs duty, which makes them cheaper than made-in-Nigeria goods. Such sharp practices have contributed in no small measure to driving Nigerian industries underground. Nigeria has also not recovered from the World Trade Organisation treaty, which she signed but has not been in a position to take advantage of because of her weak manufacturing sector.

From creditable source, these were the reasons why Buhari initially refused to sign on the dotted line when 44 other Africans did in Kigali, Rwanda, in March this year, then you can ask yourself this question, in what drastic manner has the situation changed between March and August that warrant Mr President to change of mind toward sign? The president also said, “We will not agree to anything that will undermine local manufacturers and entrepreneurs, or that will lead to Nigeria becoming a dumping ground for finished goods.”  Looking at the president’s wise decision and that of the Organised Private Sector and labour union backing him, who are actually in a position to advise on such matters.

Strikingly, the fears the President expressed then still linger. But while the Nigerian Association of Chambers of Commerce, Industry Mines and Agriculture, Lagos Chamber of Commerce and Industry, and other stakeholders is calling on the government to urgently sign the AfCFTA agreement, the Manufacturers Association of Nigeria and other groups within the OPS are still strident in asking Nigeria to steer clear of the pact, for now, unless the plan is to drive the fledgling manufacturing companies to an early grave, as was the case with the textile companies. The textile companies were the biggest private sector employers in the country before shutting up shop due to unfair competition with smuggled foreign textiles.

The President of MAN, Frank Jacobs, is concerned; stressing that government should await the outcome of a study that should guide negotiations before coming to a decision. According to him, MAN’s position enjoys the support of the Nigerian Employers Consultative Association; National Association of Small Scale Industries; and the Nigerian Association of Small and Medium Enterprises, who are the real employers of labour. Stretching his argument further, Jacobs described NACCIMA as an organisation of traders while others, as manufacturers, create most of the jobs.

With a population estimated at close to 200 million people and adjudged the largest economy in Africa, Nigeria should ordinarily be excited about AfCFTA exactly the way China, the most populous country in the world, is taking advantage of trade with other countries of the world. For instance, the United States trade deficit with China climbed from $347 billion the prior year to $375.2 billion in 2017, the New York Times, quoting data released by the Customs Department, says. This has led to the ongoing trade war between the two largest economies of the world.

For Nigeria, which does not seem to have anything else to sell than crude oil, to sign on to AfCFTA, there has to be economic diversification with emphasis on manufacturing. This cannot happen, however, without fixing the ailing power sector and generally easing the stifling business environment in the country, which, in turn, would attract foreign direct investment.

Nigeria should also strengthen agriculture by providing incentives to farmers. During negotiations, emphasis should be placed on preventing neighbouring countries from flooding the Nigerian market with smuggled goods, for instance, rice smuggling remains a threat to government’s current rice farming drive.

In Amehnews’ opinion and editorial urges, the present government should ensure that Nigeria market does not become a dumping ground for foreign goods in the future. The country is passing through dumping here and there, in all mana of goods and services which ordinarily should not have happened, Standard Organisation of Nigeria (SON), National Agency for Food and Drug Administration and Control (NAFDAC) etc are the living testimony to the dumping.

We reported earlier that a Nigerian startup, Reelfruit and nine other startups from across Africa…