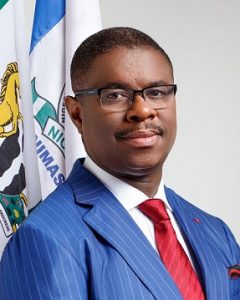 Adequate provision of basic infrastructure has been identified as a necessary step capable of unlocking the vast opportunities in Nigerian maritime industry.

This position was canvassed by the Director General of the Nigerian Maritime Administration and Safety Agency (NIMASA) Dr. Dakuku Peterside during the fourth quarter meeting on Public Private Partnerships (PPP) organized by the Infrastructure Concession and Regulatory Commission (ICRC) in Abuja recently.

Dr. Peterside noted that given Nigeria’s strategic location, population and volume of trade in the African region, all the country needs to become a major hub of maritime activities is a strategic investment in infrastructure in the maritime industry, which should be championed through a PPP model.

According to him, “the PPP model will be able to address infrastructure deficit and as well optimize local content development. Partnership with the private sector also has the potential to enhance human capital development and active government participation in a private sector driven economy”.

Represented by Ali Indabawa, Director Abuja Zonal Office, the DG pledged NIMASA’s willingness to partner with ICRC in its efforts of ensuring infrastructure delivery in the country especially in the maritime industry and called for improved PPP efforts to provide the needed infrastructure for the development of the nation’s economy.

He stated that NIMASA is already involved in some PPP initiatives in areas such as Maritime safety, search and rescue, maritime domain enhancement, ports and flag state responsibilities, pollution response and prevention, capacity building, ship building and ship repairs, ship breaking and recycling among others.

Earlier in his welcome remarks, the Director General of ICRC, Mr. Aminu Dikko said that government should look beyond its budgetary resources for the delivery of infrastructure in the country and explore other funding methods that have become international practice.

Mr. Dikko who was represented by Mr. Mike Ohiani, Director PPP Resource department called on governments at all strata to key into the PPP method of infrastructure delivery given the current economic crunch in the country.

While noting that the PPP model was not the only option to bridge the infrastructure deficit in the country, the ICRC helmsman emphasized that it is a cost effective way for Nigeria to rebuild its decaying infrastructure.

He said the ICRC is committed to providing stakeholders the platform to accelerate knowledge of the rudiments of PPP and commended the quick response of the ministries departments and agencies (MDA’s) to ICRC’s request for inputs in its soon to be published 2017 pipeline of projects.

25 Days of Awesomeness: Cash Prizes, Beats by Dre, DSTV explorers up for grabs in Cashless December: