Dear Nigerians, Let me seize this opportunity to once again wish you a Happy New Year. Indeed 2016 was a very challenging year for all of us, but I believe that with the efforts of both the Government and the private sector, we should experience a more prosperous 2017.

Towards the end of last year, Nigeria was and is still faced with a major transportation challenge to wit: the impending closure of the Nnamdi Azikiwe International Airport in Abuja. This impending closure is attributed to the urgent need to rehabilitate the only runway servicing the airport.

From Thursday 12th January 2017 to Tuesday, 17th January, 2017, the Nigerian Senate engaged the stakeholders in the Sector with a view to considering other options available to the millions of Nigerians that would be affected by the Six Week Closure of the airport. The whole essence of this engagement was to find the least stressful alternative that would benefit the country.

I have given the forgoing preamble mainly to further underscore the need to quickly and speedily reinvigorate our Rail Transportation Sector, in line with the provisions of the Nigerian Railway Bill, 2016. To achieve this, our counterparts in the House of Representatives will have to hasten up to pass their version of the Bill so that the harmonised version can then be forwarded to Mr. President for his assent.

The new railway bill sponsored by Senator Andy Uba from Anambra state laid the ground work for the reengineering which the Senate Committee on Land Transport which I chair had to do to achieve the quality of the legislation that was eventually passed. I must once again commend my colleagues on the committee and the technical committee that worked with us leading to the passage of the Nigerian Railway Bill, 2016. 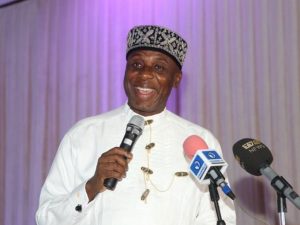 Minister of Transport, Rotimi Amaechi smiles about opportunity in the contract

I remain a strong believer in the primacy of the railway. It is my belief as well that the Railways remain a critical infrastructure that will extenuate Nigeria’s motley transportation problems. Hence, I am dedicated to leading the charge for the “revolutionalisation” of the system.

Last year, I expressed my thoughts on the same subject in an essay entitled, ‘Time has come to open up our railway to private participation’, which was published a few days before the passage of the bill in July 2016. Given the situation we have found ourselves in now, I deem it necessary to quote some of the thoughts expressed therein, hereunder.

“Government after government has invested even more in road expansion projects. The result as can be observed in the case of Lagos and Abuja has been a gradual occupation of the expanded roads with more cars. This is attributable to rural-urban migration as well as population explosion across the nation,”.

“Mass transit remains a very pivotal aspect of the development of any city. It plays a critical role in enhancing productivity of the state by ensuring the movement of the largest number of people from point A to Point B within the shortest possible time. It also reflects the quality of life and the value placed on the unit citizen by any responsible government.

“You will agree with me that the most effective means of transporting large quantities of humans, goods and services within any country is via rail. This is why whenever the topic of mass transit is discussed; rail transportation must be given its pride of place.”

Now, with the impending closure of Nnamdi Azikiwe International Airport, a frontal focus on the railway is more than ever germane. The goal is not to have just functional railways, but to have trains that are as fast and effective as those we see outside Nigeria.

I believe that the private sector has a pivotal role to play in turning around the fortunes of the Nigerian Railway System. To achieve this, the Senate has taken the lead in giving the executive the requisite Legislative Support to attract Foreign and local investments into the sector. This was the prime goal, when the Senate committee on Land Transport, worked round the clock to ensure the passage of the Railway Bill in good time.

The imminent total closure of the second busiest airport in Nigeria has caused unrest for many Nigerians and foreigners going by their outcry. Imagine if we had an effective rail system whereby cities, states and communities are linked. A sturdy railway system or a faster train traversing the Abuja to Kaduna corridor, the consequences of the total closure of the Abuja Airport would be minimal and frequent travelers might not feel much pain or discomfort.

The time for linking every Nigerian artery by rail is now.

– Senator Gbenga Ashafa represents the good and industrious people of Lagos East Senatorial District in the Senate. He is also the Chairman of the Senate Committee on Land Transport.

Kindly Share This Story: MTN has the best mobile network in South Africa, according to…