The Tin Can Island Port Customs command rendered an account of the Command’s stewardship in 2019, which shown the Command actually generated a total of N346,508,836,486.54(three hundred and forty-six billion, five hundred and eight million eight hundred and thirty-six thousand four hundred and eighty-six Naira and fifty-four Kobo) during the year under review. 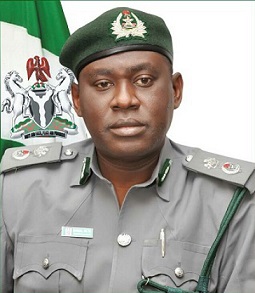 According to the statement made available by the image maker of the command, Uche Ejesieme, revealed that the Command met its revenue target and exceeded it by a total sum of N4,202,755,990.15; a performance of 101.21%.

The further comparative analysis of the revenue against the preceding year 2018 shows a remarkable improvement, as the celebrated  collection then only stood at N34,353,850,320,520.

Comptr Musa attributed the performance to:

“Implementation of series of transformational agenda and Standard Operating Procedure’s (SOP) developed to facilitate trade without compromising the extant provisions.

“The fact remains that the command was able to create templates and blueprints that guided it’s actions in line with the mission and vision of the Comptroller General of Customs, Col. Hameed Ibrahim Ali and his management”, he explained, adding that the officers and men also meticulously performed their anti-smuggling tasks credible.

“The command during the year under review 2019 strengthened it’s anti-smuggling operations for optimal performance.

“If compared with 2018 seizures, it indicates a recorded improvement from the seizures of 14x40ft, 2x20ft (16 Containers) and 5 uncontainerised others ranging from bales of second hand clothing, furniture, children toys, used bogs and shoes, expired medicaments, used tyres, used fridges e.t.c with a total DPV of N2,883,531,500 recorded during the prevailing year of 2018”, he said, dovetailing to exports.

“The command also embarked on sensitization of stakeholders and would be exporters on the need to take advantage of the potentials inherent in export. To this effect, the command recorded an increase in the quantity of export in 2019.

“The command will continue to sensitize and encourage export as a means of attaining balance of trade for the interest of the Nation”, he assured before taking a bird’s eye look on trade facilitation

“Trade facilitation is a key component of the building blocks of the World Customs Organization arising from the KYOTO Convention and the SAFE framework of standard, other international treaties of Customs administrations and World Trade Organization (WTO). This is further domesticated with the presidential directive on ease of doing business initiative.

“As an eloquent testimony and our renewed enthusiasm to enhance our efficiency, the Command, during the period under reference, articulated various Trade Facilitation initiatives, which have been instituted as part of our Standard Operating Procedure (SOP) including the use of barge for movement of cargo.

“Accordingly, the Command developed a more cordial working relationship with the Critical Stakeholder through constant Engagement.

“Similarly, a re-invigorated Dispute Resolution Committee was constituted to deal expeditiously with disputes arising from Valuation, Classification, PAAR, Rules of Origin etc. Importers or their Agents are encouraged to take advantage of the availability of Bond facility to take delivery of their consignments where disputes persisted.

“Added to these is a re-engineered help desk, domiciled in the office of the PRO, where inquiries are channeled and when such inquiries are beyond the scope of the PR Unit, it is escalated to the CAC.

The last but not the least is the ONE STOP SHOP a facility where all alerts/interventions emanating from Q d: A, CIU, Valuation, compliance/strike force would be synchronized with a bid to ensuring that issues are resolved without going through unnecessary bureaucratic bottlenecks.

“The command, while basking in the euphoria of the remarkable achievements, is not isolated from challenges which limited its operations in terms of Revenue etc. Port of the major challenge we had is the issue of poor access and road infrastructure, lack of Government Warehouse facility, non availability of operational equipment by the Terminal Operators among others, lack of Scanners. Similarly to the above wcs the removal of some

“Terminals that were hitherto under the Command, this affected the volume of cargo handled by the Command and by implication the revenue accruable to the command. These and many more contributed to the operational limitations, absence of which the Command would have achieved even more. The importance of conducive working environment cannot be over emphasized.

“Finally, I wish to pay tribute to the Comptroller General of Customs, Col. Hameed Ibrahim Ali and members of his management for their tremendous support with the provision of appropriate softwares (NICIS II) and hardwares, working tools, vehicles etc and leadership which no doubt put us on our’ toes. We promise not to renege on our responsibilities as we intend to strive for more efficiency and effectiveness. We will not let our guards down, having realized the enormity of the task ahead. The command is at the vanguard of this drive and has developed strategies for the actualization of the mandate.

“To this effect we must give kudos to the stakeholders, particularly the various freight forwarding groups for their support to the command. The command will continue to cherish the contributions  of our patriotic and compliant stakeholders while urging non compliant stakeholders to toe the line of patriotism In the same vein, may I specially commend the media, who as the watch dog of the society, have always supported the service and command through thick and thin”, he concluded.

Kindly Share This Story:Football fans on DStv can look forward to seeing one of Africa’s top footballing sons,…