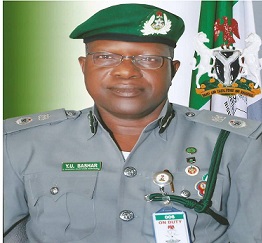 The Tincan Island Command of the Nigeria Customs Service is statutorily charged with the responsibilities of collecting/generating revenue from all dutiable imports, accounting for same as well as facilitation of legitimate trade.

The Command, under the Controller, Comptroller Bashar Yusuf, despite the various challenges of recession during the year under review bagged the sobriquet of a “benchmark Command” as it recorded in the various remarkable achievements.

The operational architecture of the Command is structured in a way that allows for checks & balances, especially the close monitoring of all declarations with a view to ensuring that all infractions are detected and necessary actions taken, to serve as deterant.

Consequently, the operational paradigm and dynamics received a major boost as a veritable tool for facilitation of legitimate trade and adherence to due diligence in the discharge of our functions.

“Interception of large quantity of arms & ammunition based on well profiled intelligence on 15th February, 7th March and 4th April 2016 respectively and handed over to DSS.

“The infrastructural face-lift of the office complex which was hitherto in a deplorable condition is worth of commendation, the establishment of a well equipped clinic to serve the health needs of both officers and other members of the public, oversight visit of the senate committee on customs to the command on Thursday 27th October 2016 also seizure of thirty-one (31) containers of 50kg parboiled rice, falsely declared as bread improvers/flavoured yeast disodium on 19th august, 2016.

“Not left out was the seizure of 27 x 20ft containers of vegetable oil in 25kg kegs at emog terminal on Thursday 3rd November, 2016 was another case of false declaration which was entered as disodium chemicals.

For instance, “the interception of one thousand three hundred and ninety five (1,395) cartons of nau nau ready to eat food preparations imported from India– such as egusi soup, porridge yam, beans, fried rice, jollof rice etc along with 8 bags of unmanifested substances in 1 x 20ft container consisted of 200 fully compressed substances which was handed over to NDLEA and later confirmed to be cocaine with a street value of 2billion naira.

Also hand over, suspects to standard organisation of Nigeria (SON) for falsification of SONCAP while NAFDAC received expired medicaments on the 31st of August and expired sweets on the 11th of November, 2016, respectively.

Worth commendation is the establishment of ICT centre with 30 work-stations, fully networked for training/re-training and capacity building of officers and other stakeholders by the command during year under review.

“The commands remarkable performance during the period under review attracted eulogies and encomiums especially from the Customs Hierarchy.  These commendations which were communicated in four (4) different letters at the instance of the CGC bore testimony to the appreciation of the Service.  It is remarkable to state that at no time in the history of the Service has any Command received four (4) letters of commendation in a space of two months.  That to us is a milestone which the Command will sustain in the New Year and beyond.”

In a statement released by Uche Ejesieme, the Public Relation of the command who noted that “the issue of integrity, transparency and due diligence which is encapsulated in the change mantra of the CGC has provided the needed impetus for the Service to thrive.  Infact, no Command or officer would like to be a weak link in the value chain.  It therefore suffices to say that we are on our toes to ensure efficiency and effectiveness.  At the Tincan Island Command we have resolved to consolidate on the gains/achievement of the past year and to do even more.   We are operationally ready to cope with whatever challenge that we might encounter in the New Year and beyond.  As a benchmark Command, we are not leaving anything to chance in ensuring operational efficiency. 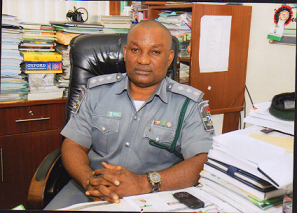 Uche Ejesieme, the Public Relation of the command

“The command is determined and poised to forge a better synergy and collaboration with the critical stakeholders and other Sister Agencies for the implementation of the fiscal policies of the Federal Government.  However, we wish to reiterate our zero tolerance for false declaration or other deliberate infractions.  In this regard, all areas of Revenue leakages will be identified and blocked, and any attempt by an importer/and or his agent to circumvent the process will be viewed seriously.

In 2017, any Organization or Business without a POS and Accounting Solution is in the DARK AGE!!! say Beta Boss

Former MI-6 spy known to U.S. agencies is author of reports on Trump in Russia