The Central Bank of Nigeria on Tuesday outlined the disbursements it had so far made in various sectors of the economy to cushion the adverse impact of the COVID-19 pandemic. 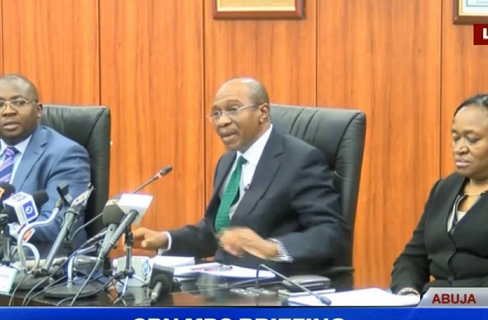 According to the bank, about N369bn has been disbursed to small and medium businesses, manufacturers, pharmaceutical companies, among others, under different financial support schemes of the CBN.

The CBN Governor, Godwin Emefiele, reeled out the interventions of the bank while speaking at the 13th Annual Banking and Finance Conference in Abuja.

He said the bank created the N100bn target credit facility for households and small and medium enterprises affected by the COVID-19 pandemic through the Nirsal Microfinance Bank.

Emefiele said, “Initially, we planned for N50bn to be disbursed but we saw that there was more and more need from households and small businesses that were impacted by the pandemic.

“The CBN took the decision to increase the size of that intervention from N50bn to N100bn. To date, close to about N69bn of this fund has been disbursed to over 140,000 households and businesses.”

The governor said a N100bn intervention fund in loans to pharmaceutical companies and healthcare practitioners intending to expand and strengthen the capacity of healthcare institutions was also created.

“Out of that N100bn, close to about 40 healthcare and pharmaceutical companies have been supported to the tune of about N45bn and we still have some of the fund available for drawdown by those who need the support,” he added.

Emefiele stated that a N1tn facility in loans to boost local manufacturing and production across critical sectors was established by the bank.

He said, “So far, we have about N255bn of this amount that has been disbursed and you would observe that up to around last month, the Purchasing Managers Index has been contracting downwards.

“But as a result of these interventions, following the easing of the lockdown, we have observed that the index has begun a positive trajectory. And we are also calling on manufacturing companies and others to take advantage of this.”

This, he said, would increase output and ultimately help the country to avoid recession.

“The impact of these measures helped to prevent larger contraction in second quarter Gross Domestic Product growth as projected by analysts,” Emefiele stated.

He expressed hope that the GDP growth for the third quarter of 2020 would reflect a significant recovery relative to the second quarter.

The CBN boss said the bank had strengthened the loan to deposit ratio policy, which had resulted in a significant rise in loans provided by financial institutions to banking customers.

Emefiele said loans given to the private sector had risen by over 21 per cent over the past year, adding that the bank’s document had close to N3.5tn released over the last year.

The CBN boss stated that the increase in outflows from emerging markets led to a corresponding depreciation in the currencies of several countries such as Brazil, South Africa, Indonesia and Turkey.

He disclosed saying “Nigeria was not exempted from the drop-in flows, as capital importation into the country declined from $6bn in Q2 of 2019 to $1.2bn in Q2 of 2020.”

Emefiele stated that restrictions on global travel by land and air; along with the slowdown in commercial activities, led to a significant reduction in the demand for crude oil.

He said these factors contributed to the 65 per cent decline in crude oil prices between January and May 2020.

He said, “Indeed at some point crude price had dropped below $10/barrel sometime around February/March. Today, crude oil prices have recovered from its low of $19 in April 2020, but it is yet to return to pre-pandemic levels of over $60 in January 2020.

The governor further noted that the crash on oil prices had adversely affected revenues due the Federation Account.