The Managing Director of TPT International, Charles Igbinidu, has been honoured with, the ‘Most Outstanding PR Personality of the Year 2016’award by the management of Blissful Affairs Magazine. This is  in recognition of his contribution to the PR industry and the growth of his company 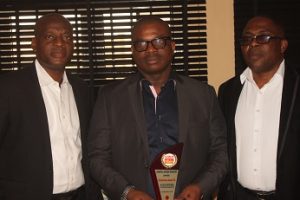 Presenting the award, Mrs. Adaobi Enekwa, publisher of Blissful Magazine, who was accompanied by Tunde Bello and Uloko Mark, publishers of Global Times Magazine and Hero International Magazines respectively, affirmed that Igbinidu is a PR expert that is worthy to be celebrated.

She stated that he has in the past been responsible for the development of large organisations whose footprints span across the country and has also contributed in no small measure to the vast growth of TPT’s clients which include Nigerian Breweries Plc, Promasidor Nigeria Limited, among others. ‘We did a survey and later came up with the choice of Igbinidu as the most outstanding personality to receive this award,’ Enekwa said.

Receiving the award in his office at Magodo, Lagos, Igbinidu commended the management of Blissful Magazine for the recognition which was based on merit and hard work, stating that it came without lobbying.‘I didn’t lobby for it. She called me that l deserved the award and l thank Blissful Affars Magazine for deeming it fit to present an award of this magnitude to me,’ he stated.

Igbinidu, is the Managing Director of TPT International. He oversees the daily operations of the company which span across corporate entities, high profile individuals and government agencies, both on routine public relations matters and extremely sensitive issues.

As one of the foremost public relations experts in Nigeria, he is known for aggressive, results-focus orientation, as well as close working relationship with members of the media, influencers, decision makers, politicians and celebrities.