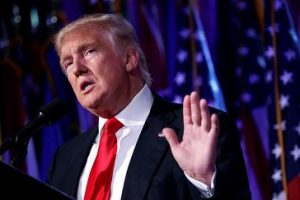 “In addition to winning the Electoral College in a landslide, I won the popular vote if you deduct the millions of people who voted illegally.”

Angered by demands for a recount in the three states that gave him an electoral college victory, President-elect Trump made a bold but unsubstantiated assertion in a tweet — that “millions of people” voted illegally in the presidential election. He suggested they voted for Hillary Clinton, who now leads in the popular vote by 2.2 million votes, and thus he actually also won the popular vote.

Winning the Electoral College is all that counts in the presidential race. But losing the popular vote by such a substantial margin apparently gnaws at Trump. Is there any basis for his claim?

The simple answer is no. This is a bogus claim with no documented proof.

Our colleagues at snopes.com and PundiFact have already examined this claim, back when it was hot in the right-wing blogosphere, not a claim made by a future U.S. president. The whole thing started with a few tweets by a self-described conservative voter fraud specialist, Gregg Phillips.

These claims were then picked up by such purveyors of false facts as Infowars.com, a conspiracy-minded website that, among other things, claims that no one actually died in the Sandy Hook shootings. One article described Phillips as being affiliated with voterfraud.org but in reality he claims to be founder of votestand.com, supposedly an app that detects vote fraud. Phillips also has claimed that Obamacare is the “biggest voter registration fraud scheme in the history of the world” because it provided opportunities for voter registration.

In any case, Phillips made this claim — and then has refused to provide any evidence to back it up, even though reporters have asked:

“He said he has chosen not to release more information because he is still working on analyzing the data and verifying its accuracy,” PundiFact reported. “Phillips would also not say what the data is or where it came from, or what methodology he used.”

It’s certainly rather odd that Phillips would make such a claim before he had verified whether it was true. He did not respond to a query from The Fact Checker after Trump tweeted, though he gleefully celebrated anger at his claim.

Back when Trump was trailing in the polls and was threatening to dispute the election results because the system was “rigged,” we’ve previously given Trump Four Pinocchios for making a number of bogus claims about alleged voter fraud.

Among other things, Trump falsely asserted that illegal immigrants were tipping the results in elections, based on a misinterpretation of disputed data. Even the researcher who produced the data said his findings were being taken out of context by Trump: “Our results suggest that almost all elections in the U.S. are not determined by non-citizen participation, with occasional and very rare potential exceptions.”

A representative of the Trump campaign did not respond to a request for evidence of Trump’s claim.

Simply put, there is no evidence that “millions of people” voted illegally in the election.

Now that Trump is on the verge of becoming president, he needs to be more careful about making wild allegations without little basis in fact, especially if the claim emerged from a handful of tweets and conspiracy-minded websites. He will quickly find that such statements will undermine his authority on other matters.MSN