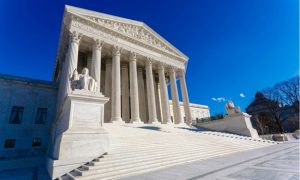 A case now before the U.S. Supreme Court will determine how long companies will have to worry about the U.S. Securities and Exchange Commission coming after them to recover funds that were deemed illegally obtained.

The question the Supreme Court will consider is whether the SEC is limited to a five-year-period in obtaining these funds. That opinion, and a contradictory opinion, which is what led to the court’s review, both focus on whether disgorgement is the same as a fine, forfeiture, or penalty, all of which are subject to the five-year statute of limitations.

In its Aug. 23 ruling in Securities and Exchange Commission v. Charles Kokesh, the 10th U.S. Circuit Court of Appeals in Denver held the SEC was not subject to the five-year statute of limitations.

The SEC had charged Kokesh with misappropriating funds from four business development companies in violation of federal securities laws from 1995 through 2006.

Following a jury trial, the U.S. District Court in Las Cruces, New Mexico ordered the disgorgement in 2014 of $34.9 million plus prejudgment interest of $18.1 million and imposed a $2.4 million civil penalty, according to the ruling.

Kokesh appealed the ruling on grounds including the disgorgement order must be set aside because the claim accrued more than five years before the SEC brought its action and was therefore barred by a five-year statute of limitations.

“The reasons for this view are clear,” the ruling said. “Properly applied, the disgorgement remedy does not inflict punishment … Disgorgement just leaves the wrongdoer in the position he would have occupied had there been no misconduct.”

“Defendant complains that the disgorgement order is punitive because he is required to disgorge more than he actually gained himself (some of the misappropriated money went to others),” the ruling added. “But there is nothing punitive about requiring a wrongdoer to pay for all the funds he caused to be improperly paid to others as well as to himself.”

The ruling also says disgorgement is a not a “forfeiture,” which is the view held in a contradictory opinion by a unanimous three-judge panel of the 11th Circuit Court of Appeals in its May 2016 ruling in Securities and Exchange Commission v. Barry J. Graham.

That case involved defendants who had violated federal securities law by selling condominiums “that were functioning, in reality, as unregistered securities,” said the ruling.  The SEC in that case had also waited more than five years to seek disgorgement against the defendants.

The ruling in that case held that forfeiture and disgorgement are the same, and therefore disgorgement was subject to the statute of limitations, and the SEC’s disgorgement effort was time-barred. “We find no meaningful difference in the definitions of disgorgement and forfeiture,” said the ruling.

The ruling said, however, that the law applies to disgorgement “because forfeiture includes disgorgement.”

Almost every claim in our legal system “is subject to a statute of limitations.  For important reasons, the courts have thought for a long time that civil claims should be brought in some timely manner,” said Daniel W. McCaughey, a partner with law firm Ropes & Gray L.L.C. in Boston.

“People forget, documents are misplaced and our court system is just more accurate if there is contemporaneous evidence, or at least not stale evidence,” where someone waits too long to bring a claim, he said.

Another factor is, with a statute of limitations, “everything moves on if there’s some dispute. You don’t have to worry about it ten years after the fact,” Mr. McCaughey said.

Michael J. Dell, a partner with law firm Kramer Levin Naftalis & Frankel L.L.P. said he believes “the Supreme Court has already made clear” that should be a five -year period that should govern in the Kokesh case.

In its 2013 ruling in Gabelli v. SEC, the U.S. Supreme Court held in a unanimous ruling that the five-year statute of limitations to bring a civil suit seeking penalties for securities fraud against investment advisers begins when the fraud occurs, not when it is discovered.

“I think that’s how the court should rule” in this case as well, Mr. Dell said.

However, Kenneth Yeadon, a partner with Hinshaw & Culbertson L.L.P.  in Chicago, said the rule within the jurisdiction of the 7th U.S. District Court of Appeals in Chicago has been that the statute of limitations does not apply to disgorgement.

The view is that disgorgement is an equitable remedy, intended to put the victim back in the same position he was in before the wrongdoing occurred, while forfeiture is a civil penalty, meant to exact a penalty for misconduct, Mr. Yeadon said.

The ruling has some insurance implications, according to Joseph Monteleone, senior counsel at law firm Rivkin Radler L.L.P. in Hackensack, New Jersey.  In all but about a dozen states, disgorgement is insurable.

However, those states where it is not insurable include major commercial centers such as California and New York. “For the most part, it’s not going to change the insurance coverage aspect,” he said.

From a business and directors and officers perspective, though, “you would probably not want to see the SEC prevail because that would enable (the SEC) to have more leeway in pursuing” its cases and less likely to run into a statute of limitations, said Mr. Monteleone.

Telcos industry grow its lines to 236m in 14yrs