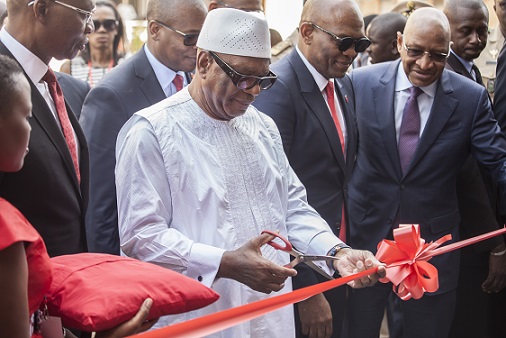 The pan African financial institution, United Bank for Africa (UBA) Plc on Monday commenced full banking operations in Mali, extending its footprint and fulfilling the aspiration of deepening banking penetration in Africa. The launch of UBA Mali  brings to 20, the number of African countries, where the Group currently operates, with global operations in the United States, United Kingdom and France.

The launch of the bank’s latest addition in Mali was occasioned by his Excellency, the President of the Republic of Mali, Mr Ibrahim Aboubacar Keita who gave an unprecedented speech at the opening ceremony. ‘Tony promised it and he did it’, said the President, referring to UBA Group’s Chairman, Mr Tony Elumelu on his promise made several years ago to bring UBA to Mali. The Malian president praised UBA Group for the vision to expand the bank’s footprint to Mali. He commended the tenacity and commitment of UBA and its Group Chairman to the development of the continent, calling African financial  institutions to follow the developmental philosophy of the bank and its chairman in   growing  infrastructure, deepening financial inclusion and being catalysts for eradicating poverty in Africa.

In his response as he welcomed the  dignitaries and all stakeholders present at the launch, Mr  Elumelu, asserted UBA’s sustainability principles and philosophy. “UBA is Africa’s global bank, a leading pan-African brand, committed to democratising banking on the continent. We are progressive partners for African corporates, institutions and governments whilst also helping to fulfil the financial aspirations of individual customers. Our train has finally arrived in Mali. We are here for mutual progress; we are here for shared prosperity”. Elumelu noted.

The Group Managing Director, UBA Plc, Mr. Kennedy Uzoka, expressed his enthusiasm on the Group’s operation in Mali, saying ‘We are in Mali to offer world class financial services that will surpass the expectations of our customers. I assure you that UBA is poised to deliver excellent services to the entire population of Mali’ he posited.

The CEO, UBA Mali, Alhassane Sissoko told customers that the Bank is  optimistic on the competitiveness of its  franchise in Mali with strong potentials for  accelerated market share gain over the near to medium term. He re-assured private and public sector players of good things to come. “The advent of UBA in Mali marks a turning point in the history of the Malian banking sector with new opportunities for businesses and individuals.  We will always have in mind, the progress of our customers’ Sissoko said.

The event ended with President Keita wishing UBA well as he cut the ribbon to open the doors to the newest Bank in Mali, ‘I wish UBA Mali a very good banking life and that their entrance into Mali will expand our banking sector even  more’. 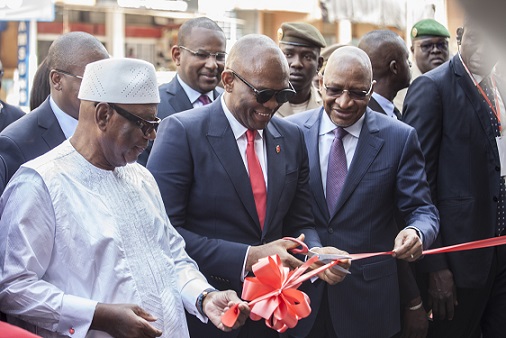 United Bank for Africa Plc is a leading pan-African financial services group, with operations in 20 African countries, as well as the United Kingdom, the United States of America and presence in France. UBA was incorporated in Nigeria as a limited liability company after taking over the assets of the British and French Bank Limited who had been operating in Nigeria since 1949.  The United Bank for Africa merged with Standard Trust Bank in 2005 and from a single country operation founded in 1949 in Nigeria – Africa’s largest economy – UBA has become one of the leading providers of banking and other financial services on the African continent.  The Bank provides services to over15 million customers globally, through one of the most diverse service channels in sub-Saharan Africa, with over 1,000 branches, customer touch points and robust online and mobile banking platforms.