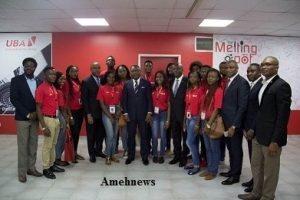 The United Bank for Africa (UBA) Plc Friday launched the maiden edition of its Campus Ambassador Programme with the induction of the first 15 brand ambassadors.

The UBA Campus Ambassador Programme is an initiative to identify young emerging leaders among students of tertiary institutions and give them a unique and highly rewarding learning experience.

“The 15 successful candidates were selected from among 200 students across tertiary institutions in Nigeria through a rigorous screening exercise in line with set criteria.

The colorful inauguration ceremony was held at the UBA house in Lagos with the Deputy Managing Director, Victor Osadolor, and other senior management staff in attendance.

“UBA is pleased to have you all on board as valuable Ambassadors who will help us propagate our goodwill messages, ethos, values and what we stand for as a bank, across your institutions,” said Osadolor. He noted that the goal is to give students a platform to demonstrate leadership as well as build and instill the brand ethos into the consciousness of the youths.

According to Osadolor, UBA is a bank with strong affiliation to youths, evident in the Bank’s scholarship and grants schemes through the UBA Foundation National Essay Competition among stother educational initiatives.

“Two hundred of you went through the process and 15 of you came out tops, which proves that you are leadings lights, energetic and enterprising with great potentials which is exactly what we want to explore. The values you bring on board will help us support this process and we do hope as you learn and internalize what we stand for, you will all be good ambassadors and represent us well as admirable leaders others can look up to, propagating our message even beyond the 12 months period of your assignment as UBA ambassadors”, Osadolor said.

Also speaking, the Head, Student Banking of UBA Plc, Tomiwa Sotiloye, said UBA, being a top financial institution with presence across Africa, is one the ambassadors should be proud of, especially in the discharge of their duties of spreading the institution’s ethos. He charged them to be good leaders and positive influencers who should stand out by ensuring the bank’s reputation soars high in their respective campuses.

The 15 ambassadors, who are A-list students in their various institutions, include Orji Somtochukwu Philippa a 300 Level Medical student of Abia State University, Uturu. She is currently a UBA Scholar after winning the UBA Foundation National Essay Competition in 2011. Phillipa is a Member of the Campus Press Student Authors’ Association (CAPSAA) and a Founder of ‘The Fe-clinical Group’ for Female pre-clinical medical students, ABSU.  Ahmad Mustapha is a 400 Level, Quantity Surveying student at the Ahmadu Bello University, Zaria. He is a Social Media Enthusiast, Writer and an avid reader. Odunewu Oluwasegun, from the University of Lagos is a 300 level student of the Department of Radiography, University of Lagos. He is into writing and blogging.

The statement revealed that during their one year renewable tenure based on active participation, the ambassadors are expected to develop different initiatives that will be sponsored by the Bank and execute various objectives of the bank over the period. They will also serve as a bridge between the bank, the students and the school authorities.

Pan Africa bank, UBA disclosed that the selected ambassadors will form a preferred pool for recruitment consideration upon graduation.