It was a tensed and emotional Sunday night that saw the check-out of JayKech (Jay and Nkechi) from Ultimate Love, proudly Naija reality television show. 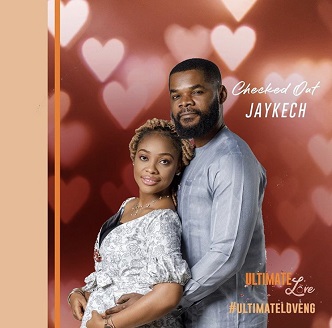 The couple were the fourth couple to be checked out during the Sunday live show after they received the least number of votes out of the four nominated couples from the voting public last week. They, however, left smiling home with N 500,000 and other items in their portmanteau they got in the Love Pad after playing the Jeopardy game on stage.

Meanwhile, five couples were nominated for possible check-out during the live nomination show on Sunday. The couples as announced by the show’s hosts, Dakore Egbuson-Akande and Oluwaseun Olaniyan, are DoubleChris (Chris and Chris Ville), Iykeresa (Iyke and Theresa), Obiebi (Obichukwu and Ebiteinye), PreshDavid (Presh Talker) and Roksie (Rosie and Kachi).

The couples with the least number of votes will be evicted during the live check-out show next Sunday.

Adesuwa Onyenokwe, the show’s Aunty, however, announced a new twist to the show. Unlike the past weeks, she revealed to the Love Guests that none of the nominated couples will neither be performing the Monday real-world mission task, nor will she save any of them.

Aunty also disclosed that, henceforth, she will no longer visit the Love Pad and the weekly Masterclasses have been concluded as the last two weeks of the show has been designed for the couples to further strengthen their relationships. She, however, noted that she will continue to communicate with the Love Guests through the domiciled Love Pad tablet.

Voting commenced on Sunday at 9:30 pm and will close on Thursday at 10 pm. Voting can be done via the Africa Magic website and mobile platforms and DStv and GOtv Apps.