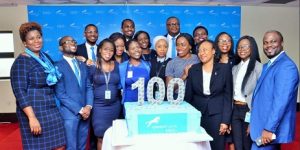 UNION BANK OF NIGERIA PLC which marked its 100 years in operation in the country has released its results for financial year ended December, 31st 2016 which shown a revenue for 2016 stood at N126,590million from 2015 figures of N117,21 million, showed N9379million representing 8 percent in the year under review 2016.

In its audited result statement released on Friday through the floor of the Nigerian Sock Exchange NSE in Lagos to investing public showed, its Profit After Tax for 2016 anchored on N15,391million as against 2015 figures of N14,301million with different of N1090million reprenting 7.62 percent for the financial year ended December 31, 2016.

According to the statement, interest income also appreciated by eight per cent to N98.0 billion in contrast with N90.9 billion in 2015.

It stated that the interest income was driven by loan book growth and improved bank asset yields.

The statement added that interest expense dropped by six per cent to N33 billion as against n35.2 billion achieved in 2015 due to improved customer funding base, less reliance on expensive interbank funding.

It added that the strategy led to drop in core cost of funds to 5.23 per cent during the period under review from 6.64 per cent in 2015.

The statement said the bank would launch a rights issue in the second quarter of 2017 to raise up to N50 billion in Tier 1 capitals to accelerate business growth and position as a leading commercial bank in Nigeria.

It added that the additional funding would also allow the bank to maintain compliance with regulatory capital requirements.

Commenting on the results, Emeka Emuwa, the bank’s Chief Executive, attributed the growth to aggressive strategies embarked upon by the company.

Emuwa said: “In 2016, we focused on executing our priorities across the different business segments, especially in the retail space, with an aggressive strategy to increase adoption of our alternate channels.

“Our success in this area, along with improved core interest earnings, contributed to pre-tax profit growth of six per cent, compared with 2015.

“Our research led product development strategy, coupled with an up skilled sales force and targeted marketing campaigns, propelled our customer deposit base by 15 per cent.”