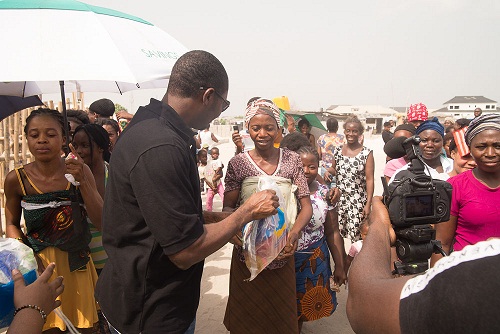 The campaign, now in its third year,is co-funded by Union Bank and its employees. The bags containing nutritional staples included rice, beans, oil, salt and readymade stews. In various parts of the country, the Bank’semployees were seen handing out the bags to people in underserved communities.

The Bank also made financial donations to over 30 orphanages, care homes and NGOs including Wesley Schools for the Blind and Hearing impaired as well as Pacelli School for the Blind and Partially sighted children, all under its UnionCares umbrella.

The Head of Corporate Communication and Marketing at Union Bank, Ogochukwu Ekezie-Ekaidem described the initiative as one of the Bank’s ways of supporting charitable causes and contributing to the wellbeing of the needy, particularly during the festive season.

“Union Bank will continue to lead the charge for social responsibility and impact. We are firm believers in supporting the communities within which we operate. This outlook drives the initiatives we organise and support under our Corporate Social Responsibility pillars.

We launched the UnionCares initiative to touch as many lives as possible during the festive season and it is fulfilling to see the level of impact the initiative has had.”

The UnionCares initiative has come to be acknowledged as a viable platform which supports the less privileged. In 2017, the Bank and its employees also donated thousands of care bags to the needy across the country during the festive season.

Established in 1917 and listed on the Nigerian Stock Exchange in 1971, Union Bank of Nigeria Plc. is a household name and one of Nigeria’s long-standing and most respected financial institutions. The Bank is a trusted and recognizable brand, with an extensive network of over 300 branches across Nigeria.

In late 2012, a new Board of Directors and Executive Management team were appointed to Union Bank and in 2014 the Bank began executing a transformation programme to re-establish it as a highly respected provider of quality financial services.