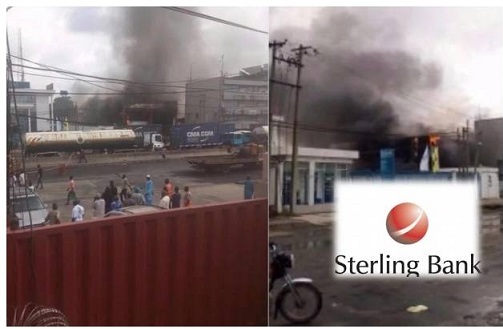 Management of Sterling Bank in the presss statement said an armed mobile policeman fleeing from an irate mob after shooting a tanker driver disrupted banking operations at our branch on Creek Road this morning. The said mobile police ran into the premises of the bank to escape being lynched.

According to the statement, the security operatives attached to the bank disarmed and arrested the fleeing mobile policeman but did not hand him over to the irate mob.

On that note that those irate mob got upset and attacked the bank with the intention of unleashing mayhem on staff and customers.

Though the security operatives attached to the branch prevented the irate mob from entering the branch but the branch’s reception area was vandalized and set ablaze while evacuating staff and customers before the arrival of police reinforcement.

As a result, the branch has been temporarily closed from operations.

We wish to inform all our customers that normal services will continue at nearby branches and through all our electronic channels.

Sterling Bank is working with security agencies to resolve the issue soon.