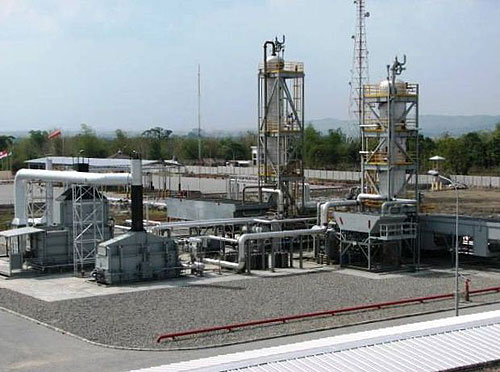 The United States United States Trade and Development Agency (USTDA), has approved a grant of $1 million (N360 million) for the detail engineering design of  20,000 barrel per day modular refinery in Lagos.
The he US Ambassador to Nigeria, Mr Stuart Symington, during the official signing of the Memorandum of Understanding (MoU) agreement at the weekend  in Lagos commended the initiative of Eko Petrochem and  Refining Company’s management.
Symington said that the proposed 200, 000 bpd production refinery will attracts more investments to Nigeria.
According to him, I believes in the project and the investment that it will attract to Nigeria economy.
” The grant was meant for details engineering design and development of the proposed refinery in Tomaro Industrial Park in Lagos.
” I feel honoured to be part of the success story. I also promised to support the projects to actualization,” he said.
The US Ambassador to Nigeria, commended the chairman if Integrated Oil and Gas, Capt  Emmanuel Iheanacho for his commitment to the project.
He said Iheaneacho is investing at a time  when the country needs it most, while lauding Nigeria government that believes profoundly in the power of the individual citizens and entrepreneurs.
“He is doing it at a time with a government that believes Nigeria can do what can be done anywhere in the world.
In his remarks, Capt. Emmanuel Iheaneacho, Chairman, lntegrated oil and gas said the Eko Petrochem and Refining Company, will complement efforts of the Federal Government in providing lasting solutions to the problems of importation of refined petroleum products in Nigeria.
He said that the US government, acting through the USTDA has accelerated the process of the planned economic investments through the industrial devlopment grant, in the sum of one million dollars which it has seen fit to bestow to us.
“The grant is to be specially used to finance the completion of the detailed analysis of supporting technologies and engineering for the implementation of 20,000 bpd crude oil refinery.
The chairman stated that in making the proposal, it was reasoned that the localisation of refining capacity if realised, would facilitate the conversation of scarce forex whilst generating major export earnings.
He said that there would also be enhanced economic value added opportunities to be realized in terms of jobs, proficts and technology transfers which would become manifest.
“We are delighted by the USTDA award as it seems the US government and the trade agency have by this gesture, recognised the economic and development potentials of our ongoing modular refinery project and the Tomaro Industrial Park/Free Trade Zone which today comes into formal existence.
“By delivering this grant, the agency has demonstrated its commitment to the infrastructure devlopment and economic growth of Nigeria, especially in the areas of export technologies and services that promote the country’s refining capacity,” he said.
Iheanacho said that the whilst we continue to celebrate the delivery of the support assistance from the USTDA.
” We also need to source investment funds, to fully actualize the built up project. The scale of the cash investments required is of the order of $250 million.
“We expect to raise this huge sum from borrowing or from equity investment committed to the project. For any potential investors, please contact me trust me it will be money well spent.
“The vision of Eko Petrochem and Refining Company is to develop a modular scalable 20,000 bdp greanfield refinery/topping plant.
” Several studies including the Front end engineering Design (FEED) as well as the Environmental Impact Assessment (EIA) studies have been completed.
“While the study for the Detailed Engineering Design will soon be ready, prior to applying for the Approval to Construct (ATC) from Department of Petroleum Resources (DPR) as well as other regulatory approvals required,” he added.

The Minister of State for Petroleum Resources, Dr Ibe Kachikwu, commended the commitment of Iheanacho to the refinery project, said financing was one of the major challenges facing most of those that had been licensed to build refineries in the country.

Kachikwu, who was represented by Mr Rabiu Suleiman, the Executive Director/Coordinator, Nigeria National Petroleum Corporation, Refinery, Downstream and Infrastructural Development, promised to provide all the necessary support required by the company to make the refinery a reality.

According to him, we all know it is very difficult to raise funds and, therefore, when you hear that the USTDA is extending its hands of fellowship and support to provide the initial seed funding required to go beyond the detailed engineering design, that also shows that behind him (the visionary of this project) there is a partner that is likely to support and provide the financing required to establish the refinery.

“For him to be able to bring down to this island the US ambassador is another demonstration of the commitment and determination to do whatever is necessary to see this project come on stream.

Kachikwu  said he was working hard to see how the company could be granted a pioneer status and secure various duty waivers, import facilitation of equipment and engineering review.

He urged the company to take the host communities along in order to create a harmonious relationship with them.

The Managing Director, VFuels, Mr Souheil Abboud, said the company was proud to partner the USTDA to further develop the refinery.

According to him, we believe very strongly in our commitment to serving the Nigerian people and are enthusiastic that the USTDA shares the same vision and commitment.

He said the refinery would be a model for those looking to improve Nigeria’s local refining capacity and would contribute to the growing demand for fuels and electricity.

The USTDA helps companies to create the US jobs through the export of the US goods and services for priority development projects in emerging economies.