The Obama administration announced sanctions Thursday against Russia’s intelligence services, while ejecting dozens of intelligence operatives from the U.S., as part of a response to what it says are efforts by Moscow to influence the 2016 election. 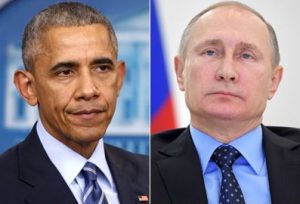 Using an executive order, Obama sanctioned the GRU and the FSB — two of Russia’s intelligence services as well as other entities and individuals within the GRU.

In addition to the sanctions, the State Department has declared 35 Russian intelligence operatives “persona non grata” in the U.S., and is shutting down two Russian compounds in Maryland and New York.

The Treasury Secretary meanwhile has named two individuals it says was involved in “using cyber-enabled means to cause misappropriation of funds and personal identifying information.”

“These actions follow repeated private and public warnings that we have issued to the Russian government, and are a necessary and appropriate response to efforts to harm U.S. interests in violation of established international norms of behavior,” Obama said in a statement.

Obama also announced that the Department of Homeland Security and the FBI will release declassified information on Russian cyberactivity to help “identify, detect and Russia’s global campaign of malicious cyber activities.”

Obama also said that the administration will be providing a report to Congress “in the coming days” about Russian attempts to interfere in the election, as well as previous election cycles.

The president also hinted that his administration to do more to hold Russia accountable.

“These actions are not the sum total of our response to Russia’s aggressive activities,” Obama said. “We will continue to take a variety of actions at a time and place of our choosing, some of which will not be publicized.”

U.S. intelligence services have concluded that the Russians interfered in the election to try and help President-elect Donald Trump win. Trump has dismissed the conclusions. Fox News Channel