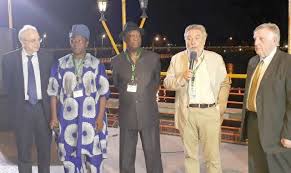 The prestigious award, which is usually bestowed on colleagues for their excellent contribution to cassava transformation, was given to the two researchers by the International Scientific Committee of the Global Cassava Partnership for the 21st Century (GCP21).

Announcing the winners at the just- concluded  GCP21 Cassava Conference in Cotonou, GCP21 Director, Dr Claude Fauquet, said  Dixon and Ceballos were selected from a pack of six highly qualified researchers across the world.

“We are proud of the achievements of both Dr Dixon and Dr Ceballos to the cassava community. This is in recognition of their work, but also a motivation to other up and coming researchers,” Fauquet said at the award ceremony.

The GCP21 also presented a special recognition to Bill & Melinda Gates Foundation for funding dozens of projects related to cassava, thereby contributing to the transformation of the root crop.

A Senior Programme Officer with the Gates Foundation, Lawrence Kent, while receiving a plaque on behalf of the Foundation, thanked GCP21 for the recognition and honour. He dedicated the award to millions of resource-poor farmers, especially women and children, who depend on cassava for livelihood and food security.

Known by his peers as “Dr Cassava,” Dixon is the Project Leader of the Sustainable Weed Management Technologies for Cassava Systems Project and Director, Development and Delivery Office in the Partnerships for Delivery Directorate of IITA. He developed over 400 improved cassava cultivars for a range of agro-ecologies and cropping systems in Africa.

He discovered the Cassava Mosaic Disease (CMD2) resistance gene from cassava landraces, which helped in the development of CMD-resistant cassava varieties that saved cassava from across Africa.

Dixon managed and co-ordinated interdisciplinary research on cassava improvement in sub-Saharan Africa; maintained and improved links between research projects and the national root crops programmes in Africa; as well as facilitated collaborative linkages with advanced laboratories and other institutions working on cassava outside Africa.

He has authored and co-authored over 350 scientific publications. Dr Dixon played an important role in the development of the Global Cassava Development Strategy and was the Chairman of its Executive Committee 2002-2008. He was also an effective advocate and champion for policy dialogue leading to substantial support by the Federal Government for cassava research and development. This success subsequently led to significant positive influence on other African governments and the New Partnership for Africa’s Development (NEPAD) in establishing the NEPAD Pan-African Cassava Initiative.

In 2004, he was conferred with a traditional chieftaincy title, Balogun Agbe, in recognition of his meritorious contribution to agriculture in Nigeria by the Olukoyi of Ikoyi land, Ikoyi, Osun State, and was honoured by CGIAR in 2005 as a great example of CGIAR scientists at work.

The other awardee, Dr Ceballos, obtained his doctorate in plant breeding from Cornell University, US. In 2007 he received the award for innovation from the Colombian Society for the Advancement of Science. His achievements in the cassava world over the last 20 years as cassava breeder include his involvement in the discovery of a spontaneous starch mutation (amylose-free) and induced mutation (small granule) in cassava, innovations in high throughput phenotyping cassava roots for carotenoid content, implementation of new cassava breeding approaches such as selection based on general combining ability (breeding value) and rapid cycling recurrent selection for high heritability traits; and development and implementation of a new quantitative genetic approach to quantify epistasis in diallel crosses.

Ceballos has written more than 100 research articles in peer-reviewed journals, several chapters published in books, and two edited books. He served as reviewer of more than 20 Ph.D thesis mostly from African candidates on cassava.

Dixon and Ceballos, in their response, thanked the GCP21 for the honour bestowed on them. Participants at the GCP21 cassava conference were full or praises for the winners for investing their lives in the development of cassava to help millions of farmers.

Kindly Share This Story: he Minister of Agriculture and Rural Development, Alhaji Sabo Nanono has…