The Igala people of Kogi East district have called for for the creation of Okura State from the current Kogi State and said they do not want Nigeria to restructure or return to regionalism. 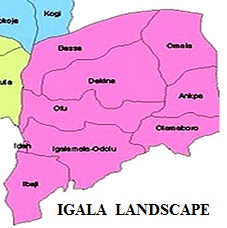 The people stated this at a press conference they held on Wednesday in Abuja to articulate their position on the clamour for political restructuring in Nigeria.

The call came against the backdrop of the process to amend the Nigerian Constitution which is at pace at the National Assembly.

Speaking under the aegis of Uk’omu Igala, the umbrella body for socio-cultural organisations in Kogi East, the people said they want Nigeria to remain a federal polity with states as federating units.

The National Leader of Uk’omu Igala, Patrick Akpa, a retired major-general, told journalists at the event in Ibro Hotel, Abuja that Okura State should be created in the interest of equity, justice and fairness in the country.

“We reject any proposal for restructuring Nigeria which takes us back to the idea of regionalism as if we are so forgetful about the ugly experiences of the First Republic,” Mr. Akpa stated.

“Regional governments in the First Republic squeezed and emasculated the minority ethnic nationalities in the North, West and East, and the bitterness associated with the report of the Willink Commission which rejected the quest of minorities for separate states did not die until the premature collapse of the Republic .”

He said the Igala support the unity of Nigeria because “the blood of hundreds of Igala sons was sacrificed in the fratricidal war to keep Nigeria’s unity during the 1967-1970 civil war.”

He called for the creation of Okura State “in recognition of the persistent struggle for it since the Second Republic in 1981.”

Mr. Akpa said the “Igala nation rejects the proposal by the North-Central Caucus at the 2014 National Political Conference which called for the creation of Kainji State from Niger and Kebbi States instead of recommending the creation of Okura State that has been on the front burner of political discourse since 1981.

He said “Insisting on the creation of Kainji State out of Niger State (North-Central) and Kebbi State (North-West) will definitely alter the geopolitical configuration of Nigeria,”

He described the creation of Okura state as “the natural equitable expression of political balance in the state creation exercise.”

“The Igala nation therefore declares its support for the retention of federalism and the recognition of the rights of ethnic groups within the states to express their right to self-determination.

“It also called for the devolution of power as the “over-concentration of power at the centre is to the detriment of the federating units.”

Mr. Akpa further advised government to review “the percentage of revenue allocation to states producing oil, the reconstruction and rehabilitation of areas affected by insurgency and other conflicts and the diversification of the Nigerian economy by fast-tracking the development of the solid minerals sector.”

The press conference was attended by executive members of the group, drawn from all the socio-political groups in Kogi East and in other parts of the country.