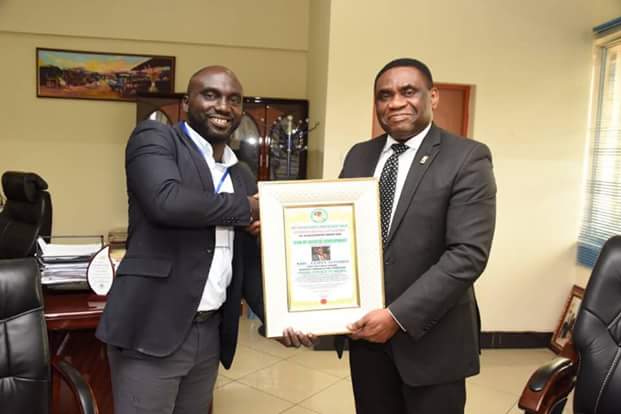 – Honoured Ojobo with Distinguished “Icon of Societal Development Award”.The Parliament of the West African Students Union, WASU – an organisation formed in London 1925 by Oladipo Solanke, a Nigerian studying in Britain – yesterday paid a historic visit to the Nigerian Communications Commission Head Office to present the award of DISTINGUISHED “Icon of Societal Development Award” to Tony Ojobo, NCC’s Director of Public Affairs. The Union also described NCC as a pre-eminent regulatory authority in Africa.Gratified by NCC’s consistent uncommon initiatives, programmes and projects geared towards operational efficiency and regulatory excellence, the legislative arm of WASU declared that it considered it an obligation to put on record the phenomenal achievements of NCC as a historical note. This explains the recognition of the Commission and the award to its spokesman.Lead by Abdullahi Shaiban (Ghanaian), Clerk of the Parliament who represented the Speaker, the WASU Parliament delegation also include Hon. Kobehi Kossa, Majority Leader; Francisca Totti (Ivorien), Chairman Parliamentary Committee on Gender Matters; Faruk Mohammed, Delegate (Cameruonian); Sadiq Abdulkareem, Delegate (Nigerian); and the Nigerian Coordinator of the Parliament Nurudeen Yakubu.Shaiban noted that the award to Ojobo is fitting because of the consistency, passion, hope and optimism that underlie Ojobo’s communication style. The WASU Parliament says these attributes of Ojobo rekindle in the younger generation the Pan-African spirit of commitment to duty and to crave for achievement in any sector one may find himself.These attributes, the WASU Parliament stated, are the drivers of the Union’s objectives which include encouraging cooperation and harmonious coexistence among students of nations of West Africa; promotion of good leadership that is comparable with global standards through interactions, learning, nurturing, discourse and other capacity building engagements; and to partner governments across the subsection to deal with social problems, especially those that affect the young people.Ojobo thanked WASU Parliament for the honour noting that it will spur the Commission to reach for greater heights. He promised to convey the Union’s message to the EVC, whom he said had led the Management of the Commission towards concrete achievements of the NCC mandate.Oladipo Solanke, born in Abeokuta in 1886 and who had attended the St. Andrew’s Training Institution Oyo, and later Fourah Bay College in Sierra Leone was a student at the University College London during which period he, alongside Herbert Bankole-Bright (a member of the National Congress for British West Africa) and many others formed the West African Students Union in 1925 with a social, cultural and political focus (http://wasuproject.org.uk/ ACCESSED SEPTEMBER 14, 2017). Solanke’s friendship with Marcus Garvey, the renowned Pan-Africanist helped to shape the history of the Union. The West African Students Union became a great voice in the struggle for decolonization and political independence of many African countries.Solanke and WASU were particularly noted for raising funds to build hostels for students of African descent who were in the United Kingdom during the colonial rule. One of such projects was named African House which provided accommodation for many African Students at that time.

NAICOM made promise to refund illegal fines with apology