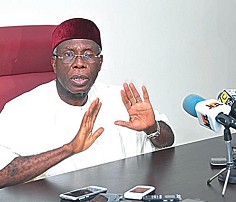 THE pan-northern socio-political organisation, Arewa Consultative Forum, said it had resolved to invite regional socio-cultural groups such as Ohanaeze Ndigbo, Afenifere and South-South leaders for dialogue over burning issues affecting the country

This was just as the regional body hailed South-East leaders and governors on their stand on the violent agitation for secession by the Indigenous People of Biafra and the Eastern Security Network.

They also assured Nigerians of Igbo extraction of the safety of their lives and property while carrying out their legitimate businesses in the North.

The northern body also commended the governors of Kebbi, Atiku Bagudu, and that of Borno, Prof. Umaru Zulum, for their courage in the fight against terrorism, urging other northern governors to emulate them.

These were contained in a communique read out to journalists by the National Chairman of the ACF, Chief Audu Ogbe, shortly after the NEC meeting.

The communique read in part, “In the very near future, the forum hopes to meet with leaders of Ohanaeze Ndigbo, Afenifere and South-South leaders to discuss the lingering issues in the country that have tended to pitch ethnic and regional groups against each other.

“The forum expressed satisfaction with the recent stand of the South-East leaders and governors on the violent agitation for secession from Nigeria by the Indigenous People of Biafra (IPOB) and Eastern Security Network.

“The forum (ACF) expressed satisfaction that the Ibo elders have finally disowned the agitators and called on the elders to take concrete measures to ensure that such agitations come to an end. The ACF notes that the South-East leaders called on northern leaders to protect their indigenes living in the North.”

The ACF, however, noted that the North won’t be part of agitation for the break-up of the Nigerian nation as being canvassed by some separatists in the country.

Besides, the forum also said it won’t asked for a separate Republic out of Nigeria such as Biafra or Oduduwa Republics being agitated for by Igbo, Yoruba in the southern part of the country.

The forum also tasked northerners to unite and fight against activities of kidnappers, bandits and other criminal elements ravaging the region.

Earlier in his remarks, Chairman of the forum, Audu Ogbe, expressed concern over the insecurity in the region, which he said, had become unbearable.

Meanwhile, the ACF, in the communique, called on both the federal and state governments to allow the local government system to work across the country.

According to the forum, the failure to allow the LG to work is having devastating effect on the security architecture of the country.