On Thursday at Nigeria Senate Chamber Hall, during the public hearing on the deployment of Fifth Generation (5G) technology in Nigeria, the Minister of Communications and Digital Economy, Dr. Isa Ali Ibrahim Pantami, has allayed the fears of Nigerians that there is no known scientific evidence till date suggesting that 5G poses any risks to public health and safety. 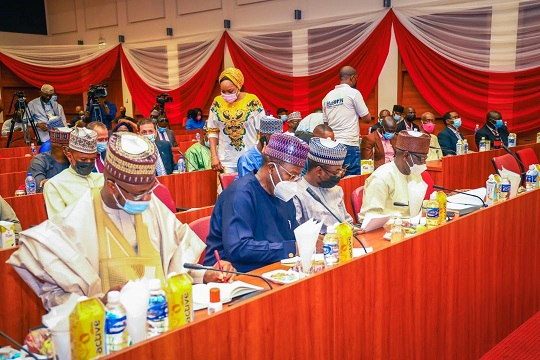 Pantami led the heads of agencies under his ministry to an investigative public hearing by the Senate Joint Committee on Communications; Science and Technology; Information and Communications Technology (ICT) and Cyber Crimes; and Primary Health Care and Communicable Diseases, at the National Assembly Chamber in Abuja on Thursday, February 25, 2021.

The heads of agencies under the ministry, who were present at the hearing include the Executive Vice Chairman of the Nigerian Communications Commission (NCC), Prof. Umar Danbatta; Director-General, National Information Technology Development Agency (NITDA), Kashifu Abdullahi and the Managing Director of Nigerian Communications Satellites Limited (NigComSat), Dr. Abimbola Alale.

Speaking further at the public hearing, Pantami eloquently affirmed the findings from independent scientific reports published by the International Telecommunication Union (ITU) and the World Health Organisation (WHO), both agencies of the United Nations (UN), which clearly indicate that there is no health risks to human lives associated with the deployment of 5G.

The Minister pointed out that after the initial approval by the President which led to the commencement, in 2019 of 5G trial in selected locations in the country and subsequent intervention of the National Assembly in 2020, seeking clarifications on probable health risks of 5G deployment, the Ministry had so far undertaken wide-ranging stakeholders consultations to ascertain the safety of 5G networks.

Pantami who leverage on the world body’s report saying having aligned with the ITU and WHO reports and studied 5G deployment situations in many advanced countries where it has been fully deployed without any health risks, the ministry can affirmatively say that there is no health risks to 5G networks.

“To this end, we are also working on a 5G deployment policy that will take care of all security, health and safety concerns of Nigerians and we will get the nod of the President, after all issues have been addressed before we proceed with  our deployment, as we cannot afford to lag behind in the 5G revolution,” he said.

The Minister clarified that 5G is an enhanced technology over the previous technologies of 4G, 3G and 2G, the three of which have more radiations than the 5G technology, adding that the “radiation from mobile technologies such as 5G is internationally certified by ITU and WHO as non-ionising, meaning such radiation does do not have harmful effect on human lives and it is far low compared with radiation from microwave oven that individuals use in their homes.”

The stakeholders took turns to state their positions on 5G deployment and issues surrounding its health and safety concerns and almost unanimously aligned with the scientific reports from ITU and WHO cited by the Minister.

Earlier in his address, the President of the Senate, Dr. Ahmed Lawan, said the Senate resolved on May 5, 2020, that the joint committee conduct the public hearing, following a motion of public importance and urgency by Sen. Uche Ekwunife, Chairman, Senate Committee on Science and Technology to resolve all public health and safety concerns around 5G before NCC can proceed with its deployment in Nigeria.

After listening to all the views and submissions by the various stakeholders, the Lead Chairman of the Senate Joint Committee, Sen. Oluremi Tinubu, said that the purpose of the public enquiry is meant to help clarify and allay the fears of any health concerns among Nigerians.

“We hope all the submissions here today which point to the same direction on the safety of 5G to human lives will put the mind of Nigerians at rest that there is nothing to fear. We also hope that Nigerians will be looking forward to having 5G deployed in Nigeria.”

She emphasised the commitment of the National Assembly to always take a neutral position on any issue generating public health, safety and security concerns among Nigerians until more clarifications are sought from concerned stakeholders.