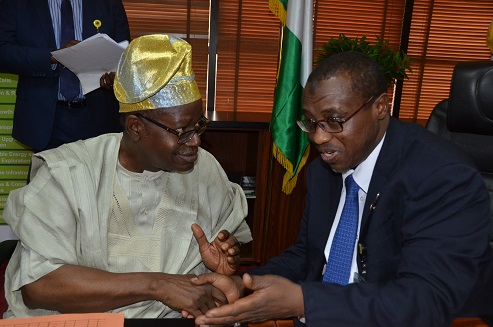 NNPC GMD, Dr. Maikanti Baru (left), clarifying a point to the Chairman Senate Committee on Petroleum (Upstream), Senator OmotayoAlasoadura (right), when the committee, on an oversight visit, was in the NNPC Towers, Abuja Thursday.

The Nigerian National Petroleum Corporation (NNPC) has said that it has been faithfully remitting all revenues accruing to it to the Federation Account.

A release by the Group General Manager, Group Public Affairs Division of NNPC, Mr. Ndu Ughamadu, said the Group Managing Director of the corporation, Dr. Maikanti Baru, gave the clarification Thursday to members of the Senate Committee on Petroleum (Upstream) who were at the corporate Headquarters of the corporation in Abuja on an oversight visit.

Dr. Baru said allegations of non-remittance of funds had become a recurrent decimal over the years, occasioned in part, to the nature of the corporation’s operations which involved credit lines requiring constant audit and reconciliation.

Further putting the issue in perspective, Dr. Baru stated that such allegations usually arose from disagreements over expenses borne by the corporation on behalf of the Federal Government.

On efforts by the NNPC to ensure that Joint Venture (JV) and Production Sharing Contract (PSC) partners do not run excessive bills at the expense of the nation, the GMD explained that apart from the establishment of an Efficiency Unit in the corporation to ensure value for money across all operations, NNPC had also done a lot in renegotiating contracts as well as benchmarking costs in keeping with international best practices, adding that the effort had yielded significant results in terms of reduction in the cost of crude oil production per barrel in the Industry.

Also responding to a question on why the PSC agreements had not been reviewed for a long time despite clauses in the agreements that stipulate periodic review, Dr. Baru disclosed that a Presidential approval had been secured and that a committee would be set up soon to carry out the review.

He, however, disclosed that in the absence of a comprehensive review, NNPC had looked at projects on a project-by-project basis and raised observations which some of the partners had taken permission to present before their managements.

Speaking earlier, Chairman of the Senate Committee on Petroleum (Upstream), Senator Omotayo Alasoadura, who led members of the committee on the oversight visit, said the committee would like to have a month-by-month crude oil production figures for the past two years and crude prices for the period.

He called on NNPC to fully cooperate with the Senate in providing input on the fiscal component of the Petroleum Industry Reform Bill and the other segments of the Bill coming up for public hearing next week at the National Assembly.

Speaking further on the visit, the committee Chairman said: “We have just come to fulfill another part of our mandate, which is to oversee what NNPC is doing. It’s not a mission to harass anybody, it’s for us to understand each other, give advice, as nobody is a sole repository of knowledge. Everybody knows that Dr. Baru is very knowledgeable in the Industry, but he can’t know everything, even people who don’t know anything about the Industry may have useful ideas that can be of help”.

Kindly Share This Story:The about N1.5tn intervention of the Federal Government in the power sector…

AMCON Will Be Bullish In Its Recovery Drive This Year – Kuru