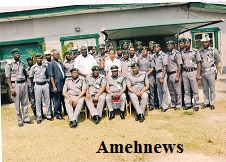 Every January 26 of the year was set aside by the Customs administrations of 180 Member States of the World Customs Organisation-WCO- to organize various national events to celebrate the first session of the Customs Co-operation Council. The annual day event called International Customs Day –ICD- by each member’s country.

Vision and objectives: The WCO is internationally acknowledged as the global centre of customs expertise and plays a leading role in the discussion, development, promotion and implementation of modern customs systems and procedures. It is responsive to the needs of its members and its strategic environment, and its instruments and best-practice approaches are recognized as the basis for sound customs administration throughout the world.

With respect to a directive from the Nigerian Customs Services headquarters on this year’s annual International Customs Day Celebration tagged “Data Analysis for Effective Management” requesting Area Controllers to observe the celebration at their various Commands.

To this end, the Customs Area Controller, Comptr Umar Yusuf said we are observing here today at our command level, Western Marine Command by interacting with officers as well as introduce new officers that were transferred to the Command in the most recent time.

The celebration at the command started at exactly 11:00hrs in the morning of Thursday January26, 2017 in attendant of officers from various outstations of the Command.

The CAC, Comptroller Yusuf introduced the new officers with their portfolio in the command as follows; the Deputy Comptr Audu, JSO as DC Admin; Deputy Comptr Edorhe, E.I as DC Revenue & TI and Deputy Comptr Abubakar, U.A as DC Enforcement.

WMC Boss from his wealth of knowledge and experience in the service said the coming of the DCs to the command was a timely one which he believes will propel the officers to do more in the area of its statutory mandate.

Describing DC Audu; the CAC called him a man of in-depth knowledge who is well grounded in his job as a custom officer, again the CAC informed the officers that DC Audu whom he called a disciplinarian will be the DC Admin for the command. He went further to introduce DC Edoheri whom the CAC described as a professor of the marine as the DC Revenue & TI for the Command.

The CAC introduced DC Abubakar, U. as an investigative guru from his wealth of knowledge in the CIU where he got his posting to head the Enforcement in the command

Furthermore, the CAC brief the officers and men of the Command on how the ICD relates with the command, stating that the event gives room for officers or stakeholders who are picked to be rewarded for their diligence both to duty and the advancement of the customs system.

Therefore, the Management of the Command marked ICD 2017 with Awarded to the best officer of the command for the year 2016 to DSC Saleh, K.M due to his antecedent in anti-smuggling activities which yielded a tune of N600 million of cannabis seizure in the year under review.

Kindly Share This Story:Dr. Hellen Oritsejafor, wife of the founder of Word of Life Bible…

Naira stabilises at N485 per dollar at parallel market