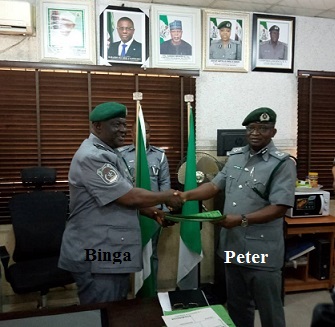 Comptroller Peter took over from Binga B.N who has been redeployed to Zone D.

Speaking at the handing over ceremony held in Lagos, outgoing Area Controller, Comptroller Binga expressed confidence that the new officer would surpassed his antecedents adding that the new controller has all it takes to succeed.

He also described the new controller as a core professional in customs operations adding that “I am handing over to a very competent officer and I believe he will surpass all I have done in this command.

“Comptroller Peter is a PSC ++ officer and I wish him good luck,”Binga added.

While reiterating customs operations in addressing smuggling activities at sea, Comptroller Peter called for information sharing among stakeholders which according to him, would bring about improvement in customs operations at sea and land borders.

He affirmed to consult the outgoing controller whenever the need arises in addressing issues bothering on smuggling at sea.

He noted that the Western Marine Command, would support all revenue generating commands by blocking all smuggling activities at sea.

Peter said that the amphibious arm of customs would maintain working cordial relations with other stakeholders in the sub sector to achieve the mandates set aside by management of the service.

The Western Marine Command (WMC) is saddled with the statutory function of suppression of smuggling activities and enforcement of other extant laws that the
Service may assign to it from time to time.

Its operational area covers the whole of South Western axis of the country’s water-ways and creeks.

According to a statement made available to newsmen by Emmanuel Tangwa, spokesman of Command said “At the beginning of the year 2019, the Customs Area Controller rolled out new strategies aimed at achieving maximum and efficient Operation. One of such strategy was a 24hrs patrol of the crecks and waterfronts of the Western axis by Officers and Men of the Command.

” Operation Total Blockade” was strengthened thus sending serious signals to smugglers. Thirdly, the CAC organized several interactive mtetings with border communities from Akere, Idiroko, Ere, Badagry and Yekeme outstations in a view of letting them know the ills and dangers of smuggling to the Nigerian State and the economy.

“The outcome of these meetings was tremendous.It led to a substantive reduction in smuggling along the creeks and the water-ways.

“As a result of the “Operation Border Drill’, the CAC deemed it necessary to open up an outpost at “1IBESHE” community a major outlet to the high-sea to checkmate the activities of smugglers. Officers and Men of the Command are stationed there on a 24hrs patrol. This initiative led to several seizures made by the Command during the festive season.

“The aforementioned strategies led to improvement in the Command’s anti-smuggling activities. A total of Thirty C30) seizures of various items namely, Foreign Parboiled Rice, Frozen Products, Cannabis, Petroleum Products, Second Hand Shoes and Clothes, Security Agency Uniforms, Plain Material and Wrappers,Tramadol, Buffalo Homs, etc. it is worth noting that anti-smuggling activities in the year under review was higher than the previous year 2018.

“With the commissioning of the Customs Sea-going Vessels, on Thursday 12 September, 2019 in Lagos, anti-smuggling activities of the Command were strengthened.

“The seizures were made at different times and at various places within the Command’s area of jurisdiction. For example Aseke, choki, Ibeshe Beach, Ere,Akere, High Sea, Idiroko, Badagry, Bawe, Alaba market water-side, etc.

Zenith Bank proposed final dividend of N2.50 per share, translates to a dividend yield of 12.9%