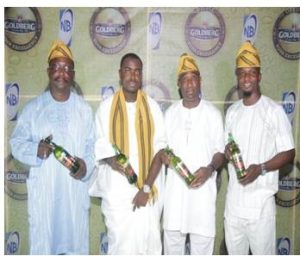 The determination by Nigerian Breweries Plc to further strengthen the affinity of Goldberg Lager Beer with consumers in the South West has been identified as the basis upon which the brand’s new credential campaign was activated in Lagos and Ibadan.  The brand recently unveiled its new identity in a credential campaign named: ‘Your Excellency’.

Patrick Olowokere, Corporate Communications/Brand PR Manager, Nigerian Breweries Plc said the activation could not have been held at any other place because Goldberg is the number one brand in the South West region. “Your Excellency could not have commenced its journey from any other place apart from the South West of Nigeria where it is the favourite beer brand of the people”, he stated.

Due to the brand’s cultural affinity with the people in South West Nigeria and the loyalty of consumers there, Olowokere said the unveiling was held at the two locations to strengthen the bond that has developed over the years between consumers in the South-West and Goldberg lager beer.

According to him, the people of the Southwest and Goldberg lager beer also share a common bond – respect for traditional values and institutions. That is why the brand has thrown its weight behind festivals like Ojude Oba in Ogun State; Udiroko in Ekiti State and the Osun-Osogbo in Osun State, festivals that define and capture the essence of the cultural ethos of the people.

Corroborating him, Emmanuel Agu, Portfolio Manager, Mainstream Lager and Stout Brands, Nigerian Breweries Plc said as a brand that demonstrates its high regards for the culture and traditions of its target consumers, Goldberg is a befitting beer that deserves the befitting title: “Your Excellency”. “No other beer brand matches Goldberg’s respect for the people’s culture. Goldberg has demonstrated that it occupies a class of its own in adding value to the way of life of the people”, he stated.

Similarly, Funso Ayeni, Senior Brand Manager, Regional Mainstream Brands, Nigerian Breweries Plc, said “just as “Your Excellency” is at the apex of all kinds of addresses used for occupants of certain positions of high standing all over the world, that is how “Your Excellency” is a befitting address for the befitting beer, Goldberg.”

The activation of the campaign attracted a large turnout of consumers as well as the company’s distributors in Lagos and Ibadan. The events featured colourful cultural performances as well as an appearance by wave making Lil Kesh in Lagos and the popular Small Doctor in Ibadan.