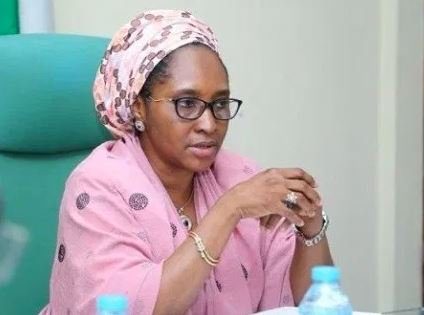 The Federal Government on Sunday said it had opened discussions with the United Kingdom on the possibility of raising “Jollof Bond’ to finance the national budget.

The Minister of Finance, Budget and National Planning, Mrs Zainab Ahmed, also said the $3bn loan request for the expansion of the  power transmission and distribution networks in the industry had finally approved by the World Bank.

The minister said this while addressing journalists on the outcome of Nigeria’s participation at the annual meetings of the World Bank/International Monetary Fund in Washington DC.

The Jollof Bonds are bonds issued offshore, but denominated in local currency. The importance of such a transaction to a country is that it protects the issuing country from exchange rate exposure.

Ahmed said apart from the UK government, the Federal Government had also received proposals from Deutsche Bank of Netherlands as well as the World Bank on the need for naira denominated bond.

She said a working group was being set up to work on the naira denominated bond, adding that the Central Bank of Nigeria would lead further discussions on the issuance.

The funds to be raised from the bond issuance, according to the minister, will be used to support infrastructure financing as captured in the annual budget.

She said the $3bn World Bank loan for the power sector would be disbursed in four tranches of $750m each, beginning from next year.

The loan, according to her, will cover the funding gap as well as the current tariff that investors in the sector described as very low compared to what was obtainable in other countries.

The minister said, “We had very productive meetings with the World Bank Group Country Power Sector Team on Nigeria for the power sector recovery programme, wherein we received an update on the outstanding issues covering sustainable fiscal support, policy and regulatory environment, operational efficiency and infrastructure investment possibly under a programmatic approach.

“We identified the imperative of solving two critical problems, which are operational efficiency and revamping the associated infrastructure in the power sector to ensure the overall success of the interventions in the power sector.

“The World Bank indicated its readiness to provide the technical assistance in the near-term and the funding in a programmatic manner.  This financing will cover the gap between the current tariff and the actual cost of generating electricity.”

She said some portion of the loan would be for the transmission network, adding that if the government could expand the facility to $4bn, then the additional $1bn would be used for the distribution network.

On the issue of climate change in the Lake Chad region, Ahmed also said she held a discussion with the World Bank to find ways of reducing the fragility through the bank’s regional intervention.

At the end of the meeting, she said the bank agreed to include Nigeria in the first phase of an integrated project that would address some of the drivers of fragility.

Meanwhile, the Federal Government, in collaboration with international donor agencies has earmarked over $1.61bn for steady power supply across the country.

Briefing newsmen at the Kumbotso power substation, the Managing-Director/Chief Executive Officer of the Transmission Company of Nigeria, Alhaji Usman Gur, disclosed that the project would be executed  under the Transmission Rehabilitation Expansion Programme, adding, “We are rehabilitating and expanding to degree 20,000 megawatts by 2022 across the country.”

Already, he noted the Federal Government had set aside about N32bn to compensate Nigerians, whose lands houses and farmlands would be affected by the right of way to establish power lines for the execution of the projects.

“The total amount that we are going to pay for compensation across the country is about N32bn, while the total project cost is $1.61bn.”

Gur, who is also the Chairman of the West African Power Pool Committee, stated that he led the TCN team to Kano, “to validate and look at the route that will ran from  Kumbotso Transmission Substation to Rimi Zakara.

Kindly Share This Story: Airtel Africa and Standard Chartered Bank have partnered in an attempt…