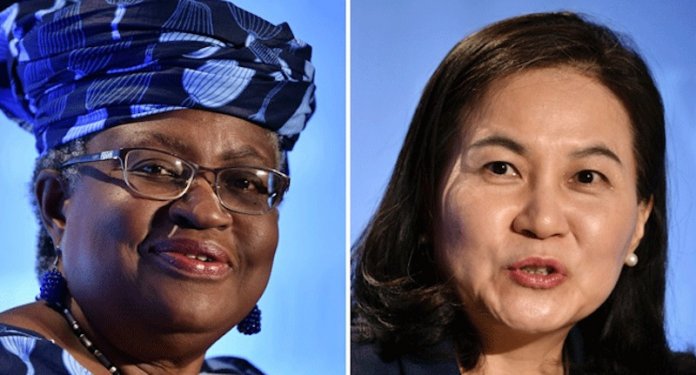 The World Trade Organisation (WTO) yesterday explained that Nigeria’s Dr. Ngozi Okonjo-Iweala and the Republic of Korea’s Yoo Myung-hee qualified for the final stage in its selection process for its next director-general because both candidates were able to secure the broadest and deepest support from the membership.

With the shortlisting, the federal government yesterday urged Heads of State Delegations to the WTO to endorse Okonjo-Iweala on the strength of her antecedents, competence and statement to the General Council.
The duo saw off competition from Britain’s Liam Fox, Kenya’s Amina Mohamed and Saudi Arabia’s Mohammad al-Tuwaijri in the second round of the battle for the position.

In a statement issued yesterday by the WTO, the General Council Chair of the global trade body, David Walker of New Zealand and his co-facilitators in the selection process stated that between September 24 and October 6, WTO members expressed preferences on five remaining candidates during consultations with Walker, Dacio Castillo of Honduras and Harald Aspelund of Iceland.

“Based on the depth and breadth of preferences articulated to the facilitators, Walker told a Heads of Delegation meeting on October 8, that the two candidates who secured the broadest and deepest support from the membership and who should subsequently advance to the final round are Ngozi Okonjo-Iweala and Yoo Myung-hee.

“The result creates a historic precedent for the WTO in that it assures that the seventh director-general will become the first woman to lead the organisation. These two candidates were chosen from a field of five that had advanced to the second round of consultations,” the WTO added.
It pointed out that as members move to the final round of consultations, Walker emphasised that the ultimate objective of the selection process was to secure a consensus decision by members on the next director-general.

“Our aim continues to be to encourage and facilitate the building of consensus among members, and to assist in moving from this final slate of two candidates to a decision on appointment.
“As this is the final round of the consultation process, it should bring us to the point where we can make a recommendation to the General Council concerning the decision,” Walker added.
The General Council is the highest decision-making body of the WTO apart from the Ministerial Conference which meets every two years.

“As was the case for the first round, the entire membership remained fully engaged in and committed to this process. The facilitators and I are grateful for this very positive response. It is clear that all members attach great importance to this process,” Walker said.
Speaking to the candidates that did not progress to the final stage, the General Council Chair said: “On behalf of the entire membership, I would like to express deep gratitude for their participation in this selection process. It was clear that members consider them individuals of outstanding qualifications.

“I am sure you will all agree with us that in participating in the selection process, the candidates have all made a significant contribution to the standing and image of the WTO.”
During the confidential consultations, the General Council members were said to have posed to each delegation a single question: “What are your preferences?”
Members then submitted two preferences to the “troika” of ambassadors.

Walker was further quoted to have said the third phase of consultations would commence on October 19 and run until October 27th, to afford members sufficient time to prepare their positions.
Another factor in waiting a week for stage three to begin is the busy calendar of meetings at the WTO next week, including a scheduled two-day session of the General Council, which Walker would chair.

“During this period, WTO members will be asked in confidential consultations to express to the facilitators a single preference and based on these preferences, the troika will deliver their assessment on which of the two candidates is most likely to command a consensus of the membership and become the seventh Director-General of the World Trade Organization.
“Walker would then call a formal General Council and present the troika’s recommendation to the membership for a formal decision.

“Following this third round of consultations, Walker will call another Heads of Delegations meeting at which the results will be announced to the WTO membership,” the statement added.
The General Council had agreed on July 31, that there would be three stages of consultations held over a two-month period that commenced September 7th.
The third stage will run from October 19 to October 27 and a winner will be announced before November 7.

Yoo, 53, is currently serving as her country’s first female trade minister, following a career in trade diplomacy and foreign affairs.
Okonjo-Iweala, 66, served as her country’s first female finance and foreign minister, and has a 25-year career behind her as a development economist at the World Bank, eventually becoming its number two.
She is also on Twitter’s board of directors and is a special envoy for the World Health Organisation’s COVID-19 fight.

According to analysts, Okonjo-Iweala’s high professional/personal qualities, international contacts and impeccable records as Nigeria’s former Finance minister/Foreign Affairs minister and as former managing director of the World Bank, stand her high above the other contestant.

She is a renowned global finance expert, an economist and international development professional with over 30 years of experience, having worked in Asia, Africa, Europe, Latin America, and North America.
She is presently the Chair of the Board of GAVI, the Vaccine Alliance. Since its creation in 2000, GAVI has immunised over 760 million children across the globe. She also sits on the boards of Standard Chartered Plc and Twitter Inc. She was recently appointed African Union Special Envoy to mobilise international financial support in the fight against COVID-19, as well as Envoy for the World Health Organisation’s access to COVID-19 Tools Accelerator.

The Managing Director of the International Monetary Fund (IMF), Ms. Kristalina Georgieva, recently appointed Okonjo-Iweala to serve as a member of her newly-established External Advisory Group.
In addition, Okonjo-Iweala served twice as Nigeria’s Finance minister, from 2003-2006 and 2011-2015 and briefly as Nigeria’s Foreign Affairs minister in 2006, the first woman to hold both positions.
As Finance minister, Okonjo-Iweala steered Nigeria through the varying degree of reforms, particularly on macroeconomic, trade, financial and real sector issues.

Okonjo-Iweala spearheaded several World Bank initiatives to assist low-income countries during the 2008-2009 food crises and later in the trying period of the global financial crisis.
On the other hand, Yoo is South Korea’s trade minister. During her 25-year career in government, she helped expand her country’s trade network through bilateral accords with the US, China and the UK.