Management of The Nigerian Stock Exchange (The NSE) at this weekend released weekly traded data shown the Zenith International Bank Plc, FBN Holdings Plc and Diamond Bank Plc equities as the top three measured by volume which they accounted for 632.027 million shares worth N8.494 billion in 5,616 deals, contributing 34.13% and 16.49% to the total equity turnover volume and value respectively. 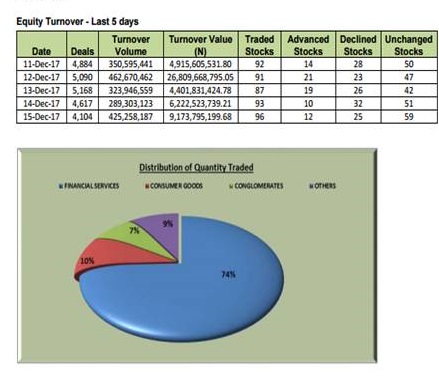 The overall traded records shown a total turnover of 1.852 billion shares worth N51.523 billion in 23,863 deals were traded this week by investors on the floor of the Exchange in contrast to a total of 3.316 billion shares valued at N36.451 billion that exchanged hands last week in 29,771 deals.

“The NSE All-Share Index depreciated by 2.09% while the Market Capitalization appreciated by 0.04 to close the week at 38,436.08 and N13.678 trillion respectively. In addition, all other indices finished lower during the week with the exception of the NSE Consumer Goods, NSE Oil/Gas and NSE Lotus II Indices that appreciated by 0.68%, 4.54%, and 0.71% respectively while the NSE ASeM closed flat.