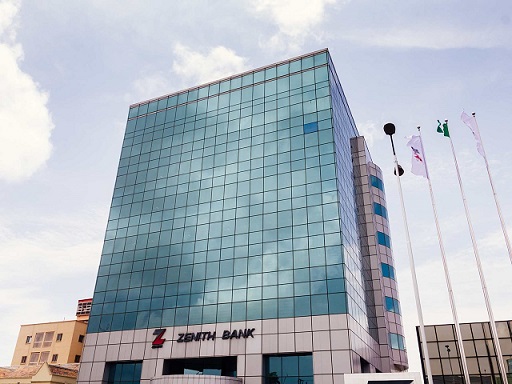 The Board of Director of Zenith Bank plc has announced the payment of interim cash dividend of (N7 849 123 446.75) seven billion eight hundred forty-nine million, one hundred and twenty-three thousand, four hundred and forty-six Naira, seventy-five kobo only from its six months operations..

The interim cash dividend of 25kobo per 50 kobo ordinary share into 31 396 493 787 outstanding share capital at date, will gives us (N7 849 123 446.75) seven billion eight hundred forty-nine million, one hundred and twenty-three thousand, four hundred and forty-six Naira, seventy-five kobo, subject to appropriate withholding tax will be paid to shareholders whose names appear in the register of members as at the close of business on Friday August 18, 2017.

According the bank if the proposed dividend is ratified by the shareholders, the Bank will be liable to pay tax in advance totalling N3.73 billion representing 30% of the taxable profit of N12.43 billion for the period ended 30 June, 2017. Payment of dividends is subject to withholding tax at a rate of 10% in the hand of qualified recipients.

The bank further stated that the closure of register of shareholders will be on Monday August 21, 2017 to enable the registrars prepare for the payment of the interim cash dividend.

Note that global depository receipt (GDR) holders will be paid on Friday September 1, 2017.”

According to the statement signed and released by Michael Osilama Otu, the Company Secretary/General Counsel dated Thursday August 10, 2017 to the Nigerian Stock Exchange (The NSE) and was excerpts from the Exchange’s site disclosed that some dividend warrants share certificates have remained unclaimed or are yet to be represented for payment or returned for revalidation.

Otu, therefore advised shareholders to update their records and/or open bank accounts, stockbroking accounts and CSCS accounts for the purpose of cash dividend payments and e-bonus.

Meanwhile, Director in the bank released its highlight of the financial statements which shows the gross earnings of the Group increased by 77.1 percent and profit before tax increased by 71.0 percent.

Highlights of the Group’s operating results for the period under review are as follows: gross earnings stood at N380,440 billion which is above N214,812 billion that was reported same period in 2016.

Zenith Bank Plc was established in May 1990, and commenced operations in July of the same year as a commercial bank. The Bank became a public limited company on June 17, 2004 and was listed on the Nigerian Stock Exchange (NSE) on October 21, 2004 following a highly successful Initial Public Offering (IPO). Zenith Bank Plc currently has a shareholder base of about one million and is Nigeria’s biggest bank by tier-1 capital. In 2013, the Bank listed $850 million worth of its shares at $6.80 each on the London Stock Exchange (LSE).

Zenith Bank has clearly distinguished itself in the banking industry through superior service quality, unique customer experience, and sound financial indices. These have become part of our corporate culture to the extent the bank is easily associated with the following attributes; Best-in-class customer experience, creativity, excellent financial performance, good asset quality, stable management, dedicated and highly skilled work-force, cutting-edge Information and Communication Technology, efficient and effective distribution channels. The bank’s strategy of assessing and managing its impact on the industry forms an integral part of our strategic objective. Specifically, the bank considers how the present and future capital requirements will be met and managed in view of projected capital requirements based on its assessment and against the regulatory capital requirement.

US govt. approves N360m grant for development of modular refinery in Nigeria